Opening Up The EMX Development System

Any idea what this is?  I had no idea. I won it during a session on open source hardware at That Conference. 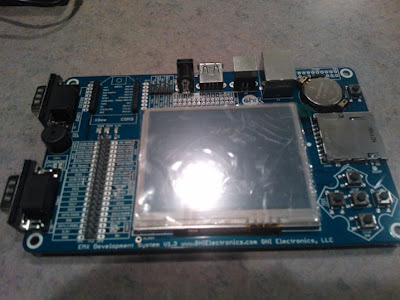 Turns out it's called an EMX Development System (it does say that right on the bottom, see?)  It's a programmable board.  It's a really nice one apparently.

I've always wanted a little board, thinking maybe it would be nice to try out an arduino, or maybe a netduino.  This thing is a monster compared to those.  It's got five onboard directional buttons (lower right) giant touch screen display, compatible with XBee, USB port, SD card, and a whole lot of things I don't even understand.

So yay for me.

To be honest, I'm a little intimidated, but I'm going to tackle this board.  Time to get reading...

Commit to Something Crazy

Full disclosure, I helped organize ThatConference.  I did a lot of the communications to the community, the speakers, the volunteers, etc.  I worked with a group of amazing people who put together an amazing event.

And I do mean amazing.  I was talking to one of the other organizers after it was all over and I was on my way home.  It was always my assumption that events of this magnitude were put on by professional event planners, not by a team of (admittedly smart and talented) software developers like me.

What we turned out was a world-class event.  It was a first year conference that ran very smoothly, like we'd been doing it for years.  We had help and inspiration from other conferences (Codemash, from Sandusky, Ohio, for example).  Everyone appeared engaged.  They were connecting, and I heard many say that they would be coming back next year.  ThatConference is something that's been needed by this portion of the Midwest for years, and I think we really opened some eyes to how awesome a conference can be.

So how did we do this?  On the long drive home, I was thinking about it.  It was crazy to me to think that we could do it.  But what if we could pull it off?  It would be a great thing.  Actually, I realized, it happened because Clark Sell and Scott Seely committed to doing this two years ago.  They committed to doing something crazy.

I like that idea.  Great things happen when we commit to something crazy.

I never really thought of it much.  But everything that someone has created, no matter how great or small, has been done because someone was committed to that idea.  I used to believe that those big crazy things were done by other people.  People that knew what they were doing.  People who had experience in... I don't know...  doing big things?

With That Conference, I realized that a relatively small group of people, surrounded and motivated by an awesome community, put all this on.  I realized that the people who build things could be anyone.

I met Hersh Ajgaonkar at ThatConference.  He told me that he made the commitment to run an ultra marathon.  You know, the kind that's even longer than 26.2 miles?  Like fifty?  To me, that's crazy.  But when he's done it, it will be a great achievement.

Sharon Cichelli gave a really awesome presentation on Crafting Your Career.  She mentioned a technique in which she wrote her New Year's letter for five years from now, talking about all the awesome achievements that year.  She let her imagination soar and came up with lots of great ideas, some of which were pretty ambitious, possibly crazy.  And yet if she commits to something crazy, she will make great things happen, for herself and others.

Do yourself a favor.  Commit to something crazy.  Write it down.  Then write a blog post about it and have the community keep you honest.  And tweet it to me @kevinpdavis.  What crazy thing do you want to do?

(Note: I didn't say commit to someone crazy, though that can make life fun, too.)
Posted by kpd at 7:54 PM No comments: