These Are a Few of My Favorite Things

I read.  A lot.  I do currently, and I have done.  I used to read fiction, to be sure, but I am currently a ravenous reader of non-fiction.  I collaborate with a lot of other people that love to read, too.  I ask for recommendations, and I get asked fairly frequently about recommendations I would give.  I thought it would be useful to collect them all in one place.

Note, I couldn't possibly come up with a list of books that I've read.  There have been too many, and my memory is shot by years of looking stuff up online.

No, these are the books I remember.  The ones that influenced me in some material way.  I'm going to categorize them, but not put them in any particular order.  I'm brainstorming here, so if you know me and know I'm missing one, you're right.


Pop Psychology
Management
Blogs (more for the people behind them.  Lots of others in my RSS, but these are my favorite)
Posted by kpd at 7:09 PM No comments:

Overheard in the Office

Just goes to show how malleable and cool language can be.
Posted by kpd at 5:54 PM No comments:

Email ThisBlogThis!Share to TwitterShare to FacebookShare to Pinterest
Labels: Corporate IT, Language

I was doing some research with insiders deep inside Microsoft after a chalk-talk session about Sharepoint and related products.  Someone I was corresponding with accidentally sent me the following scanned meeting notes as an attachment.  I'm sure it wasn't meant for me, but it does offer a window into the mind of the Marketing Department at Microsoft: 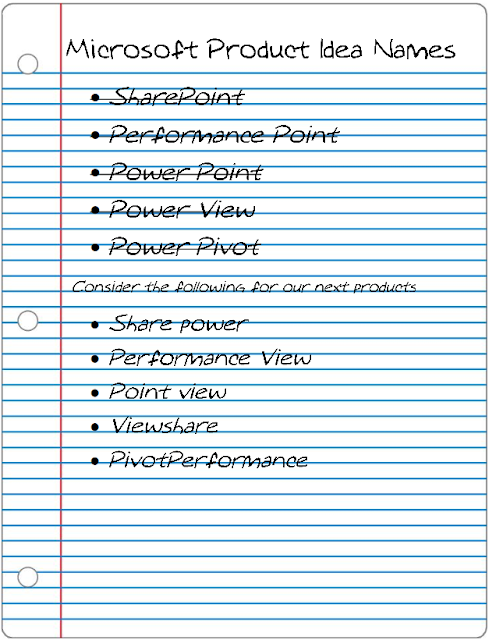 Email ThisBlogThis!Share to TwitterShare to FacebookShare to Pinterest
Labels: Parody

Wow, what a technologist.  A post or two a month about everything except technology.  Well today, I'm going to document one of my most recent struggles in the hope that someone will benefit.

Started off getting this error.

Bizarre.  So what it comes down to is that 2012 does not work with artifacts either built against or referencing a component from 2010.  A 2012 build controller won't run custom build activities (which I had) that were compiled against the TFS 2010 binaries.  Further, the custom XAML files were polluted by the workflow designer, said to be a bug in the designer, but that smells fishy to me.

Here's the steps I took.


Hope this can help someone.  I love TFS ALM, but sometimes the stuff is daunting.  The two links above really helped me out.

I mess around on my cell phone.  A lot.  I’ve never been diagnosed with any kind of concentration disorder (ADD, ADHD or the like), but I always feel at least a bit distracted, and as a result, I often fidget by checking something on my phone.

So it’s not a bit surprising that when I’m in a meeting that has become tedious, or when I’m not directly involved, I mess around with my phone.  Sometimes I check the weather, or search for something that has just come into my mind tangentially related to the discussion.  And I don’t necessarily think this is a bad thing.

Other people have their own meeting coping mechanisms for dealing with tedium.  They daydream, twirl their pens, doodle, think about going home, think about next tasks or a meeting they have to prepare for themselves.  I think before I had something so easy to distract me, I did all things during meetings.

I actually used to get so bored in meetings I defined a metric that I call The Boredom Factor.  It’s defined as

Where t = time elapsed before checking the clock for the first time and T is the total scheduled meeting time.

That’s right, I was so bored I invented a boredom metric.

So first things first.  I actually think I pay more attention with my phone out and on than if I were daydreaming.  With the phone taking up the “bored” part of my mind, it’s keeping me acutely there and in the room.  I’m not devoting 100% of my attention to the meeting topic, but I’m no longer ignoring it outright by daydreaming.  50% there is still better than 0%.  But still not the same as involving me and getting 100% of my time.  Oftentimes the distraction makes me feel more energetic and willing to contribute.

Realistically and practically, however, if I’m not 100% engaged in the discussion, then I’m being pulled out of it.

That is, if I’m in a meeting you’re running, and I’m on my phone, you can criticize me for being rude all you want, but the truth is that you are not engaging everyone in the room fully.  Consider turning the critical eye inward to see what might be keeping people from being engaged.  One of the following be the problem:
Finally, I will leave you with the idea that respect is similar to attention, in that you need to earn it from folks.  If you are not getting mine, you should consider the possibility that you are not earning it.
Posted by kpd at 7:37 PM No comments:

Back in the day – “ee when I were a lad” – and just a leaf-level developer node in a very large unnamed insurance company, there was a palpable dichotomy between those that were at the bottom working as individual contributors and the seventeen layers of management between us and the CEO.  This idea that we were “just” worker bees and that the decisions got made somewhere up in the aether.  That we were not privy to the forces that shaped those decisions, and certainly had no influence.

We had a term back then for what we assumed that the management must be doing when going about their daily deeds: bizzling (or v. to bizzle).  Kind of a cross between “buzzing” and “business”.

It was always used as a pejorative or cynical term.  This idea that a bunch of mid-level management (or the Kelly-Jelly, named so by a colleague after a particularly malleable individual) did mostly nothing except buzz around, like bees, bumping into one another and essentially cancelling out most of the net effects of the motion.  This jelly-like layer existed to protect the line-workers who needed to get stuff done, and the upper level of management where the serious decisions were made.  They were a layer of management where you could rotate people freely with almost no impact to the work happening beneath them.  When the time came to have a layoff, you had a robust middle layer to pick from.

The people at the top were called the Yuk-yuks.  I don’t recall if that was because they were laughing all the way to the bank, or it was a bastardization of “High-falutin’ Muckity-Muks.”  Or maybe both.  Lost to the sands of time.

Anyway, for most of our leaf-node days, we wouldn't see these decision makers.  The Yuk-yuks were respected, contrary to what you might think based on the silly name.  But when you got invited to be in the room with the decision makers, you could immediately see why they were not in the jelly.  They made decisions.  They didn't defer.  The buck stopped at them.  They came prepared to meetings to make things happen, and they did.  Often based on real metrics and evidence (another difference between them and the gelatinous mass between us and them).

These were not the Pointy-Haired Bosses of Dilbert fame.  These were not the clueless CEOs from that comic either.  These Yuk-yuks were people who you could reasonably set up as role models.  Pity we didn't get to work more directly with them.  To keep their effectiveness, they typically delegated all work to a team of mid-level managers, who picked up the balls and ran into each other instead of toward the corporate goal lines.

Maybe that was part of their strategy.

Whenever one of our number was invited to a meeting, that member was said to be “Off bizzling with the Yuk-yuks.”  More often than not, the person that got to go was admired for being invited to see the inner workings of the Yuk-yuk echelon.

Of course, that was before I learned more about effective management, and I now understand how these layers could naturally stratify.  I also recognize the whole us-vs.-them as also culturally destructive.   I don’t think like that anymore.  But I had to share these ancient shibboleths.  Those from my tribe may recall them.
Posted by kpd at 5:19 PM No comments: